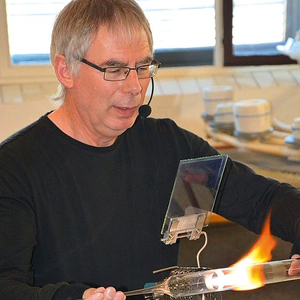 The inquiries don't come as often as they used to. Probably partly because I set the starting price very high, regardless of the prototype. What am I talking about? Design! This field of study is offered at the University of Applied Sciences in Münster. When the inquiries still came more frequently, I always used to calculate the price too low. The devil is in the details: A 30° arc is usually easy to make, but at times it can be very difficult to measure as you work. And: Designers are not craftsmen and only get to know a fraction of the practical experience during their studies. Therefore, tolerances are a foreign concept to them.

Design is more important than you might think. When I was selling at the Christmas market many years ago, there were series of glasses that, in my opinion, looked the same. But some glasses in a series wouldn’t shift. A "twin" placed next to them sold easily. The difference was hardly noticeable, but it could make or break a sale!

So design is important, and  a lot of work goes into a prototype. Students usually have no money and I am not a charity, I have to live off of my work. And there is one thing design students have to understand: a prototype can in no way be manufactured cheaper than the object will cost when it is later produced in large quantities. A prototype costs many times more. It is also much more work.

One fine day, two students came to my workshop with a request. They wanted the prototype of a teapot. When they heard my price, with an un-capped cost budget, a world collapsed for them. They had made inquiries with other glassblowers, but nobody wanted to work on their project. 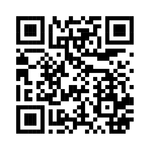 They drove across Germany for six weeks and visited various businesses without success (see QR code). In the end, I made the teapot anyway, for a smaller fee, because we got along well, and because I had met two people who had both feet firmly on the ground. Not least because I saw a lot of potential for me to learn.

The pot should enable people with mobility issues to pour a good three quarters of the contents without lifting it. For this purpose, the teapot should later fit into a cork bowl, which would provide a roll-off function. The pot was not a sphere, nor was it an oval, it had a straight surface of 20 mm. I asked my clients to provide a 10 mm thick template made of pear wood so that I could run hot glass along it on the lathe. I saw no way of doing this accurately free hand. The diameter of the pot was 145 mm.

As with many sketches – the devil is in the details.

I had never worked with a wooden template on the lathe, but a carbon template was too expensive, and the workshop at the university of applied sciences could make a wooden template for them. Unfortunately, they had no pear wood available, so they used a different hardwood and created the shape using a CNC milling machine. I soaked the template in water for a week, hoping that it would survive the work process that way. As for the glass, I had a thick-walled 85 mm pipe lying around - not ideal but usable. And it did actually work but the template was done for afterwards. I made sure to spray the template with water whenever the glass was soft. A wooden template at these temperatures is already more than borderline. What really amazed me, however, was that everything could be done with a single burner. 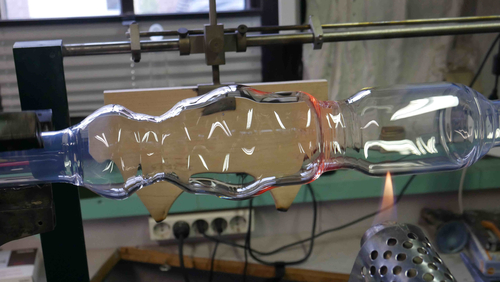 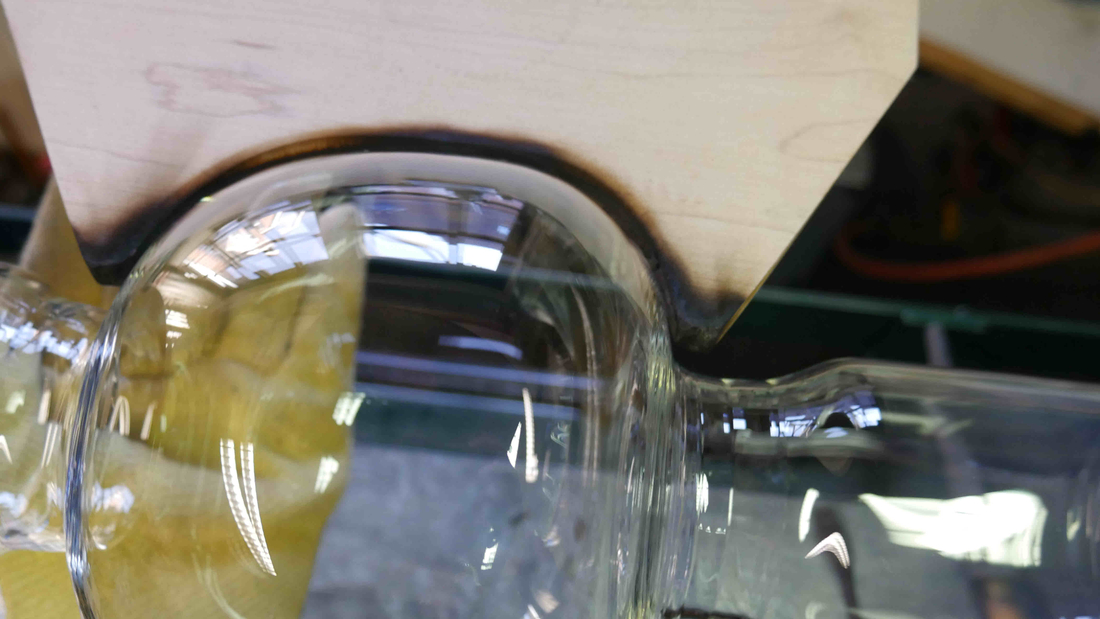 Turning the body of the teapot in the template 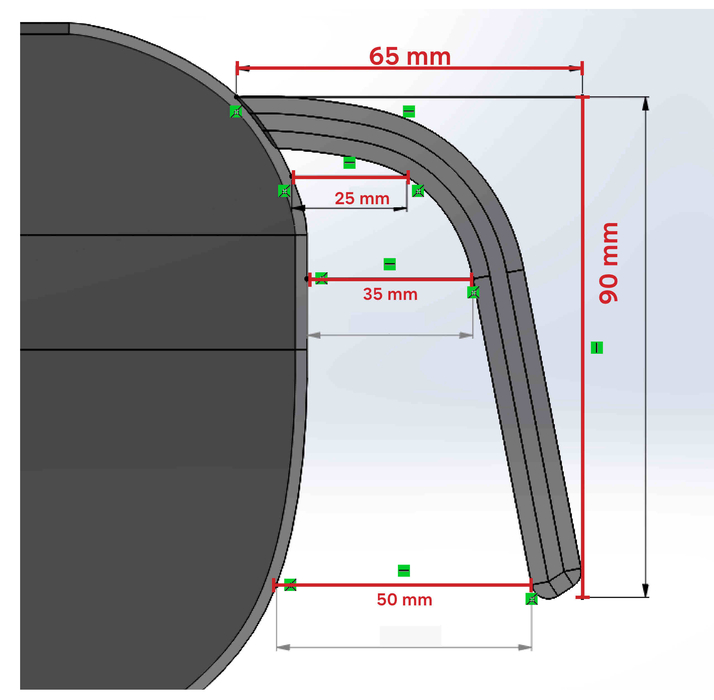 The spout, which was to protrude beyond the body of the pot, was a problem. I rejected the idea of pulling it directly from the mass of the pot right away. There was simply not enough glass. Also, in making the opening of the pot, a grinding process was required so that I could keep within the given parameters, and my tools couldn't accomplish that with a protruding spout. Therefore, I would have to shorten it at first and then lengthen it again later.

The handle was a challenge for me as well.

It was to be 20 mm wide and 10 mm thick so that it would feel comfortable for the user. It was already a daring construction in terms of statics. I needed at least 5 mm of wall thickness at the connection point for it to be usable, which of course I didn't have. But at this stage I was only making an optical prototype. I didn't have a 20 x 10 mm piece of glass either, I only had a 5 mm thick pane of borosilicate glass. Take two strips of that and stack them in the oven - that might work… I have some experience with fusing, but not using borosilicate glass. So I guesstimated, placed the strips in the fusing oven, raised the temperature to 900° C, and left it for an hour. Ideally, the strips should not be rounded at the edges, but should remain flat. At intervals, I took a quick look - that is to say no, I did not. I opened the fusing oven a little, took a picture with my phone, and then closed it immediately. It took less than 2 seconds each time and the temperature did not drop. I could look at the pictures on the phone for as long as I pleased and, importantly, I could enlarge them! But it wasn't looking good. You could still clearly see two pieces of glass, they didn't seem to connect. After cooling down, however, I noticed that it only looked like there were two pieces on top of each other. When I trimmed the block of glass and cut off 5 mm from each side, it was no longer possible to tell that there had once been two strips of glass. I was surprised! With an hour in the oven at 900°, I had had a stroke of luck.

The two separate pieces of glass are still clearly visible. 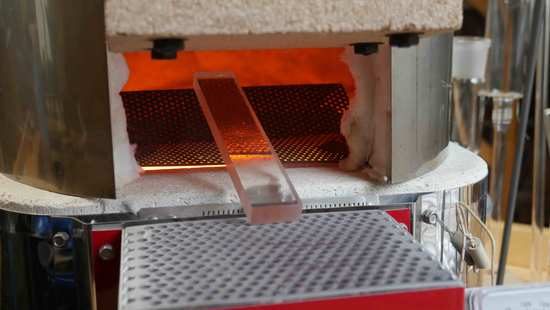 A small pre-heating oven on the worktop saves a lot of hassle. 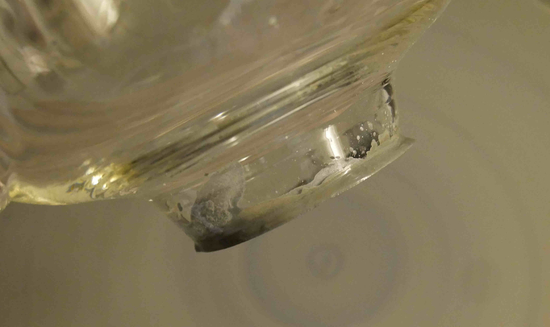 The exact diameter is achieved by grinding down the excess 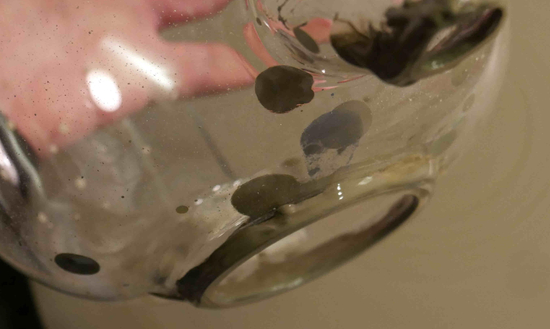 I brought the glass handle up to temperature in a tabletop oven and attached a 6 mm glass rod to hold it. The matt edges from trimming  and the pattern from the fusing oven on the surface could easily be melted away with the flame, leaving a piece that was clear and flat. Attaching the handle to the glass body was difficult. The area was simply too thin for the thick handle. I had to "botch it" a little. But as the saying goes: "all’s well that ends well".

At the top of the pot I pulled the glass tube and opened it slightly. I made sure that the pipe diameter was less than 62 mm at this point, because the specified size for the opening at the top of the pot was 62 mm. By grinding it down I was able to bring the opening of the sphere to exactly 62 mm. The grinding alone took a good hour. My "favourite process".

The pot took shape and met the requirements of the design. Now I only needed to make the bottom and then cut the spout to size. Despite having appendages on opposite sides, the size of the teapot enabled me to clamp it in a three-jaw chuck. When making the bottom, with a contact surface of 60 mm Ø, I made a silly mistake. By narrowing the 85 mm tube to 60 mm, the glass had probably become too thin and the flame was too strong when I pulled off the excess. The glass tore. I had to expand the hole and attach a new pipe to fix it. Despite this annoyance, it had the advantage that I now had enough thick-walled glass to bring the floor to exactly 60 mm. 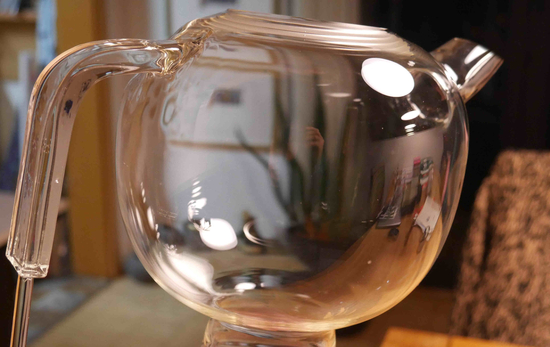 The teapot is taking shape

Making the bottom and fixing an error. 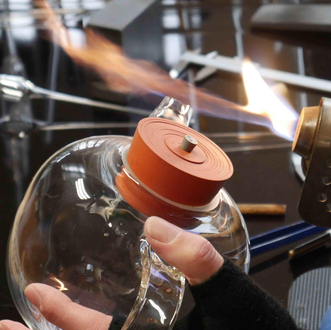 Extension of the spout

I mentioned the background of this design at the beginning, but to reiterate:

Due to its shape, and a spout that protrudes beyond the body of pot, you are able to pour three quarters of the contents into a cup without having to lift the teapot. This is a great advantage for people with mobility issues who are not able to lift such a weight. 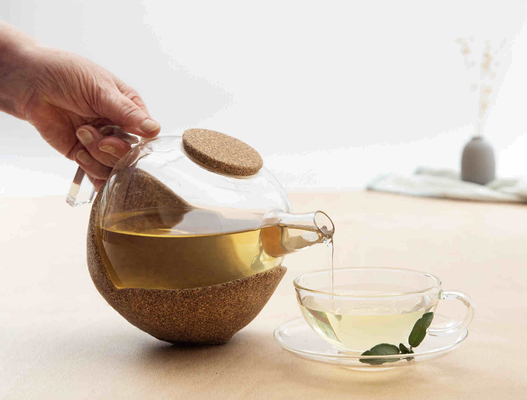 And the pot fits in well with your finished set 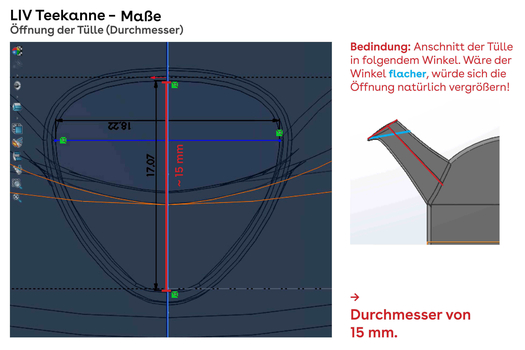 I was and am very happy to have made this teapot. I learned a lot from it. Fusing borosilicate glass in particular taught me a lot. Glass tanks could probably also be fused in this way without the need for a flame at all. There is still a lot to be learned and I, for one, am curious. The fact that I also made two people happy is a wonderful side effect. My special thanks goes to them, because without their “crazy” idea, I would never have made this teapot.

The teapot won two awards at the UNIVERSAL DESIGN AWARDS 2021. It convinced the judges of both the “Expert” and the “Consumer” categories. The judges were particularly impressed with the practical implementation of the idea in glass, which received much praise 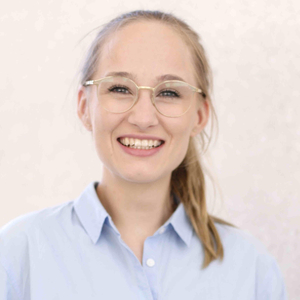 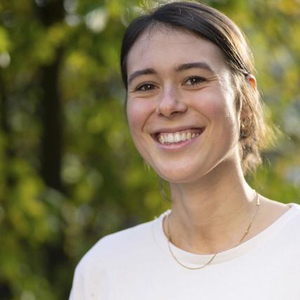 Read the article in german